Please be advised that NYK will implement 2015 Structural Revenue Recovery (SRR) program for Westbound with effect from 01 st June 2015.

Please see here the information from our US partners about the changes in the enforcement strategy of customs on the filings:

What are the key points behind the new strategy?

port level based on infrastructure and staffing resources (i.e., holding freight vs. issuing

analysis into non‐compliant ISF filings with the intent to conduct focused outreach.

o The informed compliance outreach may be by e‐mail, telephone, or letter.

o This approach allows CBP to have greater visibility into who are the repeat violators, and

it exposes any geographic areas that may require more focused ISF outreach.

revised enforcement strategy. The current enforcement review will conclude on May 13, 2015.

HQ will be conducting analysis of the informed compliance records, effectively reviewing each

policy does not preclude CBP’s six‐year statute of limitations for liquidated damages claims.

o “Significantly late” will be defined by the individual ports, and is intended to only apply

What is affected by the new strategy?

How will CBP track the violations?

where enhanced compliance outreach is required.

Is the enforcement only for ISF‐10?

enforced, pending changes to the regulation.

To Our Valued Customers:
In an effort to continue to bring you the best product in the market including number of services and the fastest transits, CMA CGM is proud to re-launch the Manhattan Bridge service. This service will cover North and Central China to/from the USEC via the Panama Canal. It is a comprehensive service that offers some of the fastest transit times in the market. 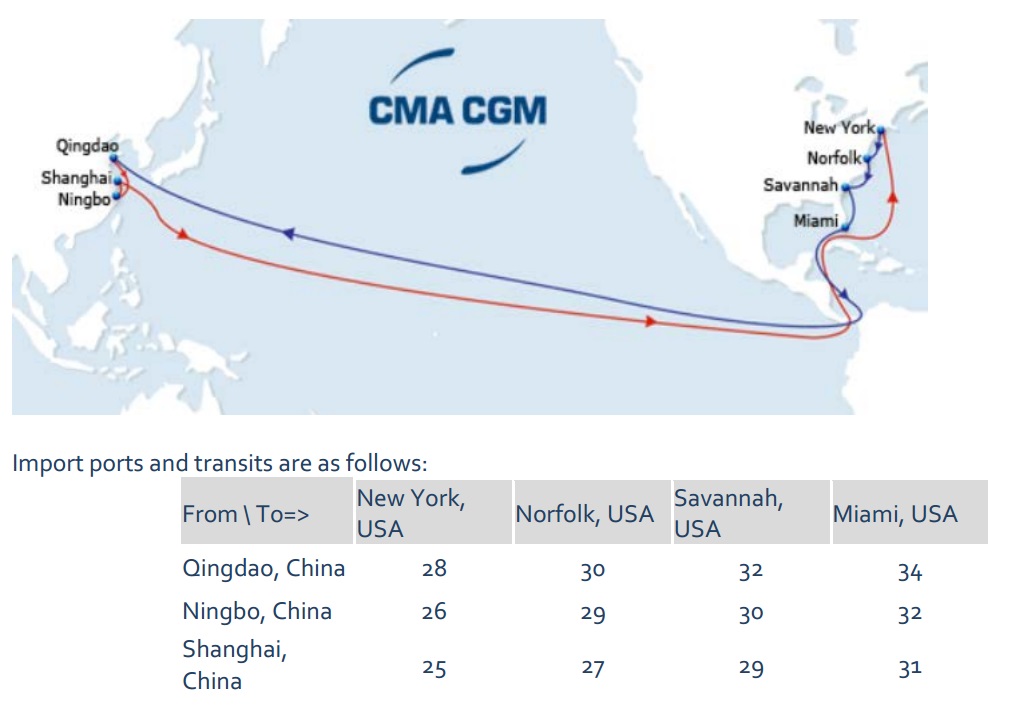 This premiere export service from the US East Coast offers:

The first sailing of the Manhattan Bridge service will be the CSCL Vancouver v. 001MBE, sailing Qingdao on May 15th, 2015.
Should you have any questions regarding this new service, please do not hesitate to contract your local CMA
CGM sales representative.
Best regards,
CMA CGM (America) LLC
1-877-556-6308

we as Agent of EVERGREEN LINE would like to inform you, that the Reefer Genset Usage Charge will be implemented in Transatlantic Import and Export Trade as follows:

 Rule: 021 -G01 Reefer Genset Usage Charge – At Port of Loading (GUC/L)
A charge of USD 200 per usage shall be applied when a reefer genset is
provided by Carrier upon shipper’s request. This charge shall be applied for
both CY and inland moves at US Port.
Charge should be prepaid by shipper.

 Rule: 021 -G02 Reefer Genset Usage Charge – At Port of Discharge (GUC/D)
A charge of USD 200 per usage shall be applied when a reefer genset is
provided by Carrier upon merchant’s request. This charge shall be applied for
both CY and inland moves at US Port.
Charge should be collect from merchant.

The increase is valid for all existing Tariff Rates, Special Quotations, as well as Service Contracts.
In case of any further questions please contact your local Evergreen Team.

Please be advised that NYK will implement 2015 Structural Revenue Recovery (SRR) program for Eastbound with effect from 01 st June 2015.

Dear Valued Customer,
In view of forecast trading conditions, please be informed that we have decided to cancel the following sailings.
(Additional cancelled sailings are Underlined as per below):

If you have further queries, please kindly contact your local NYK representative.

We really appreciate an increase of capacity on the Transatlantic as it cannot be right that the exporting industry cannot materialze their business on an ad hoc basis as ships are full for several weeks in advance:

NYK comes up with these news:

We are pleased to announce a new Transatlantic service – AX4, connecting North Europe and the US East Coast. The AX4 will be a weekly service complementing the existing transatlantic network that NYK is operating.

We hope to strengthen our existing offerings to our customers with a more comprehensive transatlantic coverage with the AX4. The AX4 will follow the port rotations as stated below and will be served on its maiden voyage by MV Colette v001W, departing Bremerhaven ETD 21 st May 2015. 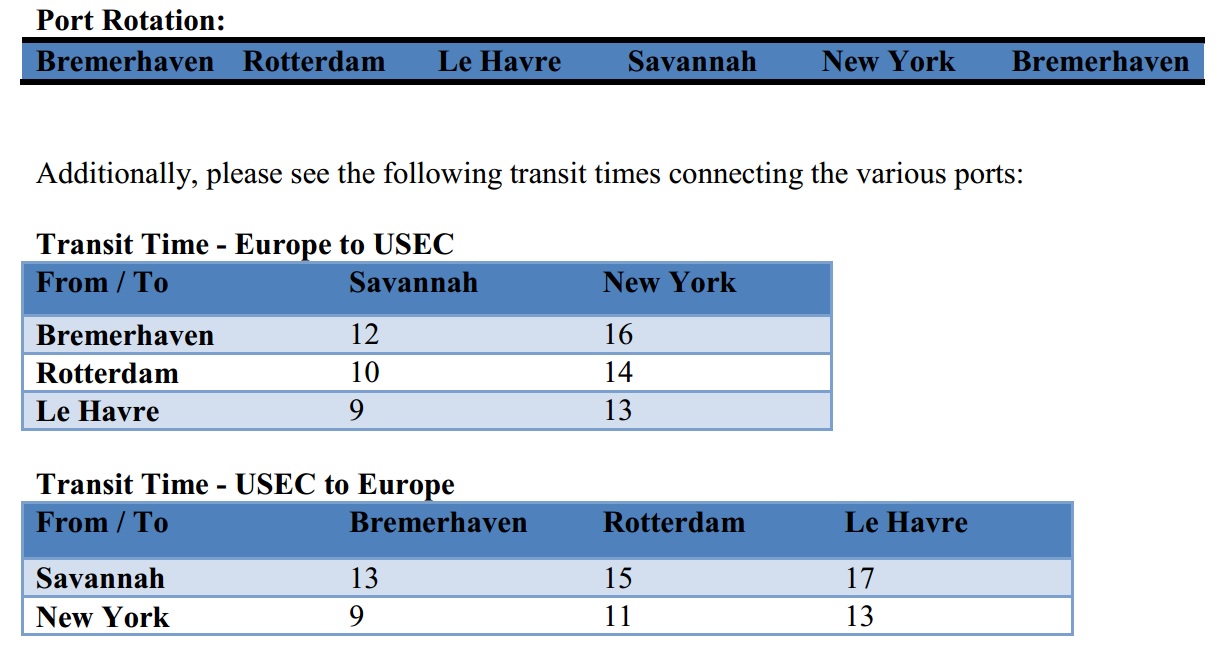 NYK Line appreciates your support. Please discuss with your Sales or Customer Service representative if you have further questions regarding NYK Line services. Yours faithfully, NYK Global Liner Management Division