Understand from resources that All India Major Port workers unions are set to go on one day strike on 2nd Sept.

The working people of the country, from almost all the sectors, from all the states, have very well completed their preparation for the 24 hour strike on 2nd September.

This strike is the 16th countrywide General strike after 1991, against the neoliberal offensive of the ruling classes and the fourth strike after all the 11 central TUs and also the National Federations came on a joint platform.
All information from various corners of the country indicate that most enthusiastic preparations have been there to make the strike a complete success.

The Co-ordination Committee of five national federations of Port and Dock Workers met at Paradeep on 21st June to plan out campaigns among the port and dock workers. Meeting again at Chennai on 8th and 9th August to review the preparations the committee decided to direct all the affiliated unions to issue strike notices to the management. Detailed programme of campaigning was worked out.

Dear Valued Customer,
Over the last few years, Maersk Line has been on a journey to simplify its rate structure enabling an easier way of working for our customers with our organisation.

In line with this, we have decided to simplify the tariff structure with respect to our IMO surcharges significantly, making the booking very easy for you.

The simplification is related to IMO classes 3, 6.1, 6.2, 8 and 9, originating from Germany, Austria, Netherlands, Switzerland, Belgium, France, Luxembourg, Czech, Slovakia, Hungary and Poland.
The tariff rates are applicable for all customers as of 1st October 2015.

If you require quotes related to the remaining IMO classes, please do not hesitate and contact your sales representative.

Let us continue to handle your IMO cargo with utmost care and precision at competitive rates!

Looking at the present market situation on the Transatlantic wb trade, it comes as a certain surprise to see a GRI notice of Hapag for October 1st. It could be that this is meant to be the brake shoe for the present downward tendency or it is a good optimism that a GRI will be possible.

Let us wait and watch the development of the market….

As part of our continued efforts to provide a wide range of transatlantic products with multiple weekly sailings and a comprehensive port coverage, Hapag-Lloyd will implement a General Rate Increase with effect from October 1, 2015.

In the aftermath of the explosion occurring mid-August in the Xingang port area of the city of Tianjin, OOCL is not able to accept dangerous goods/hazardous cargo for discharge at Xingang Port/Tianjin until restrictions are removed by the Xingang Port Authority.

For further information we recommend our customers refer to the Local News section of our OOCL.com China page located here.

Due to the serious labor shortage in Oakland, the port’s list of next initiatives includes extended terminal hours. According to the port, a proposal for permanent Saturday operations is under review with the Federal Maritime Commission. The plan would lengthen the work week to six days in Oakland, easing congestion during peak weekday periods.  The port is also finalizing plans with equipment providers to ensure any chassis can be used by any trucker. By fall, the truck trailers that haul containers over the road will be made available from a common pool.

Due to this congestion, numerous services will be omitting OAK as below: 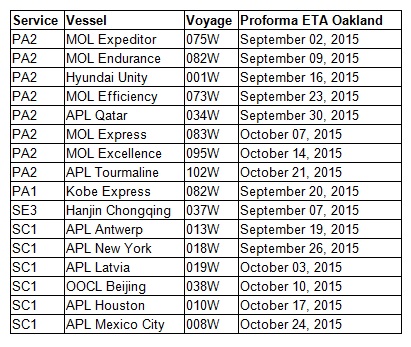 The cargo availability of local import cargo after vessel berthing is still subject to man-power availability. OOCL export customers with changes in cargo cutoffs are being issued revised booking confirmations.

Information for export cargo container receiving windows as reported by North America terminals continues to be updated daily on OOCL.com.

Attached is our current vessel schedule for reference purposes.  For the most up to date scheduling information please do refer to our interactive point to point or vessel schedule on www.oocl.com.

Please note that the BNSF Railroad will be shortening their hours of free time and increasing their daily storage charge on August 17, 2015.  They will also be counting all the days of the week as part of the chargeable time calculations.  This means that Sundays will no longer be considered as a free day during the free time calculations.  For more details see Item 37 and Appendix F of the BNSF Intermodal Rules and Policies Guide (R&PG).

The BNSF operation continues to deliver solid performance as velocity for trains, locomotives and cars all held relatively steady this week. Good fluidity was maintained across the network and the total trains held average declined to the lowest weekly level recorded this year.

Wildfires remain a continued concern across the inland Pacific Northwest. There are currently about 100 large fires impacting parts of Idaho, Oregon, Montana, Washington and California. The Sheep Fire near Essex, Montana forced BNSF to halt service through this portion of their Hi-Line Subdivision for more than seven hours last Thursday. The BNSF is working closely with fire officials and assisting local responders by deploying additional firefighting equipment, including a specialized fire train that is equipped with water tank cars, a water cannon and firefighting foam. The BNSF has also implemented procedures, including the re-routing of trains, to minimize the impact of any service disruption as much as possible.

As the BNSF has reported, maintenance activity and expansion work remains in full swing throughout their network. Last weekend, a new siding was placed into service in Lumberton, Texas on their Silsbee Subdivision, which runs north-south through Beaumont near the Gulf Coast. Sidings help improve traffic flow by enabling trains to pass each other which, in turn, increases capacity to handle more trains on the same line. This is one of five new sidings and 15 siding extensions that will be added onto the BNSF’s network this year.

Truck Power to perform import store door deliveries and export door pickups continues to be a major concern along the US West Coast, specifically in Oakland and the SEA/TAC-Portland corridor.

Further to Customs Circular No. 1179 / DGD / SP / D081 / 2015 issued by Algerian Customs related to the Tax Identification Number (Referred to as NIF), it is now mandatory to include this reference in all cargo manifests (Import & Export). In this respect, we kindly ask you to include this reference in the bill of lading instructions and other transport documents. The above mentioned Circular will be effective on September 1 st 2015, therefore, please make all the necessary arrangements to avoid any delay once cargo arrives at Algerian discharge ports (for imports) or at loading stage (for exports). Please contact your local office in case you have any questions or require clarification.

You have most likely recently been informed via the press or other channels, that the authority overseeing the Panama Canal announced that lack of rainfall due to the current El Nino situation, water levels in the lake sections of the canal were running below normal, and that they had implemented draft restrictions, as well as a schedule for further restrictions to be implemented during mid-September, 2015.

The Panama Canal Authority has advised that the maximum draft commencing September 8th, 2015 will be 11.89m (39 feet) with a further reduction in draft on September 15th, 2015 if the situation didn’t improve. Since the announcement was released last week, Panama has benefited from increased rainfall, and over the past weekend, they have announced that any further restrictions beyond the current 39 foot level are postponed with a minimum of four weeks advance notice prior to being implemented.

PCA have also announced that vessels up to 39.3 ft. draft may be accommodated depending upon the draft of Lake Gutan at time of transit. At this point in time, we do not anticipate any major impact on CMA CGM service utilizing the Panama Canal. Most of our services that have been transiting the canal have been at or below the maximum drafts as prescribed by the Panama Canal Authority.

As this is a fluid situation, it may change in the very near future. We will continue to keep you apprised of the situation as it progresses.
Thank you for your continued support. Should you have any questions or concerns regarding this change, please contact our import customer service team or your local CMA CGM sales representative. For current schedule activity please visit our Web site at www.cma-cgm.com.
Best regards,
CMA CGM (America) LLC
1-877-556-6308

We would like to inform you that effective September 21 , 2015 Hapag-Lloyd will revise its local charges and services fees in Venezuela as follows:

As a direct impact of the extreme weather condition on the South America Westcoast last week, MV MSC Nuria NW530R has been significantly delayed.

With the intention to improve the schedule reliability, it has been decided to phase MSC Nuria NW530R out of the EW1 Service at Cristobal, Panama on August 19, 2015. All containers on board bound to Europe will be connected with MV MSC Fabienne NW531R, ETA Cristobal August 23, 2015.

In addition MV MSC Nuria NW535A position from North Europe to South America will be voided. Thus Hapag-Lloyd will not offer an EW1 sailing in week 35.

The subsequent northbound position of MSC Nuria will be taken over by the replacement vessel MSC Los Angeles, phasing in at Puerto Angamos on September 28, 2015.