With reference to the advisory dated 10 November 2015, pleased be informed on a revision in our new Far East to South East India service. Effective January 2016, we will have a vessel Sharing Agreement covering the Far East/South East India trade.

Through this enhanced network, we offer:

We invite you to read about our global network and shipping services on www.maerskline.com. In case you have further questions, please do not hesitate to contact your local Maersk Line representative. We thank you for your support and look forward to serving your future global transportation needs.
Sincerely,
Maersk Line

Phase 1 of the Mombasa port project – which includes the construction of a second container terminal – is more than 90% complete, and expected to be completed in February next year, according to news reports.
The project’s first phase, estimated to cost about $900 million, is aimed at mitigating container yard congestion at the port.
Its current capacity of 250 000 TEUs is a far cry from the 800 000 TEUs it is currently handling, according to a Kenya Ports Authority (KPA) report on developing sustainable infrastructure in Africa.

China has the world’s longest high-speed rail network with over 16 000 km of track
In just eight years, China has built the largest network of high-speed railways at home on its own turf.
And now, according to Luo Xunzhi writing in Beijing for Macao Magazine, it wants to do the same around the world.
The plan includes a line to link Beijing and Moscow, and routes across South America from the Atlantic to the Pacific and across Africa from the Indian Ocean to the Atlantic. Something that, said Luo Xunzhi “the European colonial powers never achieved”.
According to the official Chinese media, the country is now in talks with 28 countries on high-speed rail projects. They have printed maps showing lines from Harbin to London, via Astana, Moscow, Kiev and Warsaw and from Urumqi to Germany via Kazakhstan, Turkmenistan and Iran. There is even a route from Harbin through Siberia across the Bering Straits to Alaska and Canada

Santova said on Friday that it had acquired Tradeway Limited, a British logistics and freight company, for a mixture of cash and shares worth £5.6 million.

In August Santova, which has offices in Africa, Australasia, Europe, the UK and the Far East, acquired Jet Freight Services of Mauritius and announced plans for the opening of an office in Ghana.

A statement from Santova said that Tradeway, which specialises in the West and East African trade routes from the UK, had a well-diversified and long-standing client base, experienced management and staff and a strong brand. The Leeds-based company has operations in freight forwarding, logistics, cargo and imports and exports.

The statement added: “Santova’s strategy is to continuously expand its international presence through a combination of the establishment of new grassroots offices and by acquiring well-established logistics businesses along key trade routes and in major international trading geographies.”
The deal, which is subject to shareholder and regulatory approvals, is expected to take effect on 01 December. The sellers, Darren Sexton and John Heald, the founders of Tradeway, will continue to serve as executive directors for minimum agreed periods.

Due to rising Terminal handling costs in German ports Hamburg Süd needs to increase the Terminal Handling Charges of REEFER container in Hamburg and Bremerhaven by EUR 15 per container.

The new amount, valid as from 1st January 2016 (date of shipment resp. cargo receipt), applicable for all trades will be as follows:

Further information can be obtained from your local Hamburg Süd and Alianca Offices. Contact details can be found under: www.hamburgsud-line.com/offices

we are pleased to inform you that Hapag-Lloyd will add the following port calls on its Europe-Australia Service (EAX):

The new Rotation will be as follows:

Further to our Customer letter of November 5, 2015 please be informed that whenever cargo in containers is picked up by the cargo interest at the destination port, marine terminal or at any inland container terminal for subsequent transportation under merchant haulage to a US inland point, and if the empty container is returned by the cargo interest to one of the following inland locations, the cargo interest will pay an empty redelivery charge.
We would like to inform you that with effect from December 5, 2015 Hapag-Lloyd will revise the Empty Container Redelivery Charge to selected locations in the USA as follows: 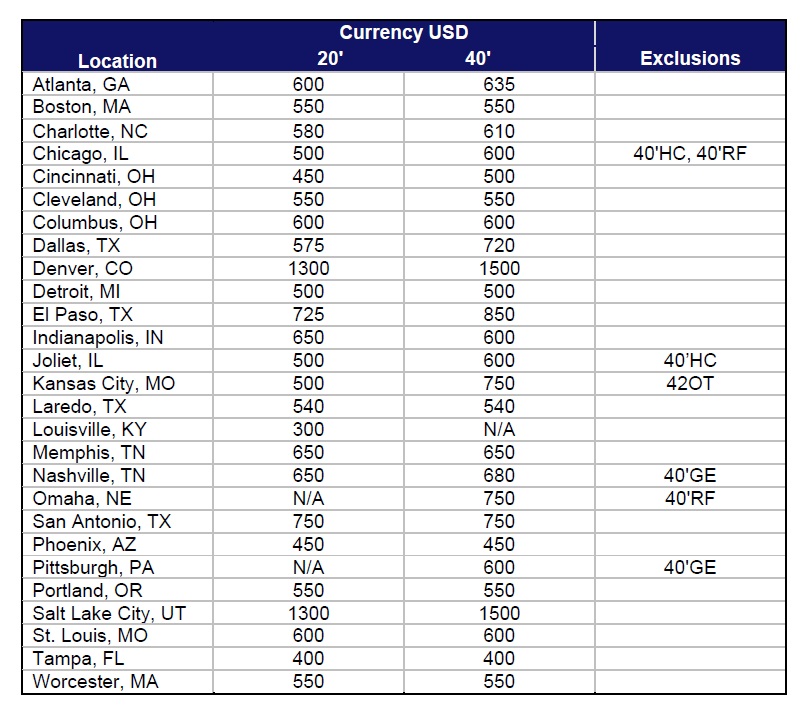 In order to attend to the content of Normative Instruction No. 32/2015 of Ministry of Agriculture of Brazil (based on International Standards for Phytosanitary Measures – ISPM No.15), please note that Brazilian Customs and Port Authorities will update their system, introducing wooden packing material as mandatory information, for all cargoes arriving in Brazilian territory.
Due this regulation and with immediate effect, you are required to provide the wooden packing material details for all cargoes destined to Brazil, by the time you submit the Shipping Instruction (S.I.) as follows:

Please note that if there is no declaration of wooden packing material on your Shipping Instruction, we will assume it as “not applicable”
For further information please contact your local Hapag-Lloyd office
Kind regards,
Hapag-Lloyd AG

We would like to inform you that with effect from December 15, 2015 Hapag-Lloyd will revise the Local Service Fees for Turkey.
Please refer to our webpage for more details.
For further information please contact your local Hapag-Lloyd office.
Kind regards,
Hapag-Lloyd AG Chairman

Dear Customer,
We regret to inform you that the MV Corcovado Voyage 537W reported a main engine pilot valve failure. It was decided to move the vessel at a reduced speed on its way to Asia.
Due to this unexpected situation the MV Corcovado original schedule will be delayed for about 6 days.
The Vessel will call Pusan and Shanghai only. All cargo with destination Xiamen, Chiwan and Hong Kong will be transshipped in Shanghai onto MV CMA CGM Mississippi Voyage 042.
We apologize for any inconvenience caused and shall keep you informed on further developments in due course.
For further information please contact your local Hapag-Lloyd office.
Kind regards,
Hapag-Lloyd AG
Chairman