Here the details of the MOL Low Sulphur Surcharge:

Dear Valued Customer,
As a global shipping company with operations around the world, MOL Liner is committed to comply with the international environment regulations in order to maintain our environment sustainability.

From January 2015, MOL Liner will engage in full compliance in the implementation of new Low Sulfur Fuel Policy set by the International Maritime Organization (IMO) in which the new policy requires every ship operating within the Emission Control Areas (ECAs) to use fuel with a maximum allowed sulfur content of 0.1% (current limit: 1.0%).

Environmental Impact
Sulfur Dioxide (Sox) emissions are toxic and cause respiratory implications as well as acid rain. Under the low sulfur fuel policy, SOx from ships will be reduced in the ECA areas, which will have significant positive effects on the environment and on health in general. The carbon footprint will also be reduced from the container shipments. 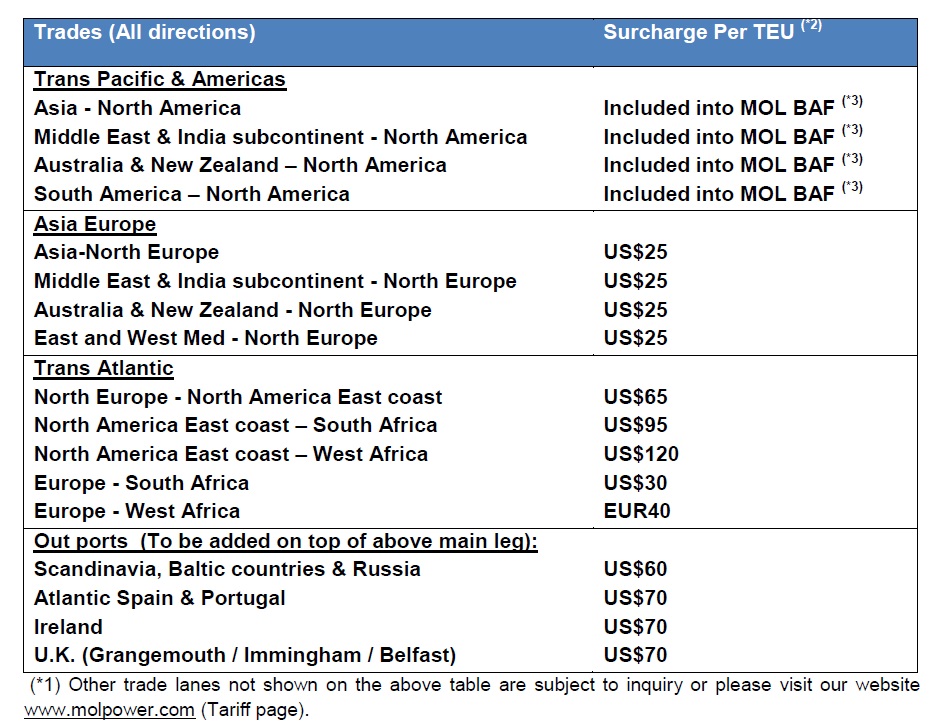 (*2) Above charges are per TEU (20 foot equivalent units) and will be applied equally to dry and reefer containers as well as trade direction.
(*3) MOL BAF (Bunker Adjustment Factor) formula does already include low sulfur fuel portion in it. The Q1 2015 BAF shall be announced by the end of November 2014 that includes new low sulfur charge effective January 2015. Please visit www.molpower.com (Tariff page) for further details.